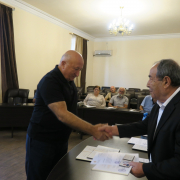 On September 10, the solemn session of the Academy of Pedagogical and Psychological Sciences of Armenia was held. Founding members of the Academy took part in the session.

Academician of the National Academy of Sciences of the Republic of Armenia, Doctor of  Physical and Mathematical Sciences, Professor Eduard Ghazaryan congratulated the founding members of the Academy, presented them with diplomas and certificates of full and corresponding members.

The professor thanked the members of the Academy for their support and hard work and wished them fruitful work. The academician expressed hope that the structure will be a platform for professionals who will do useful work in the field of science to face the current challenges.

Issues related to the structure’s activity and future plans were discussed at the meeting.

The members of the Academy expressed their willingness to carry out effective activities for the benefit of the development of education and science in our country.

It should be noted with pleasure that among the prominent scientists of the Republic the Academy has chosen Sedrak A. Sedrakyan as a full member of the Academy, academician.

The entire staff of “Urartu” University congratulates Mr. Sedrakyan for receiving this high title, wishing many years of creative and fruitful work, health and new achievements.

Want to join the discussion?
Feel free to contribute!

Next Event starting in:

Agreement on cooperation between the University of Practical Psychology and...